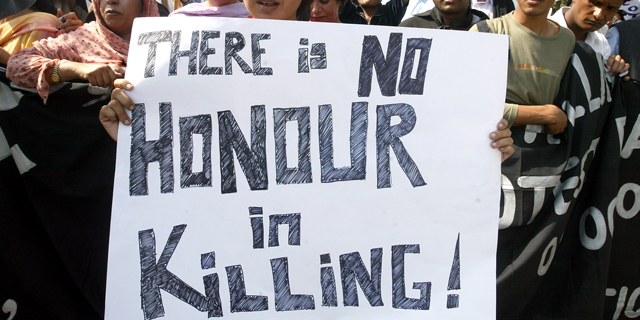 **photo is NOT mine. It is from an article written by The Pamir Times**

Hope you are enjoying the Easter Weekend!

Today’s post is just a short bit about honour killings- I didn’t know much about them so it was really interesting to find out more, but also really sad to read some of the stories 😦

Honour killings (they are also known as shame killings) are basically when a family member, or a member of a specific community is killed because it is believed that they have brought shame on their family/community. By killing them, it frees the family of shame, as if they have removed the sin from themselves. But, most of these people are Muslims. And in Islam, killing somebody is a big big big sin. BIG SIN. But, for the millionth time, these people are wayyyy more interested in culture than their religion.

Female relatives are usually killed because of marital-related issues. By this I mean that they have gone against their family’s wishes and married a boy of their own choice (ie. gone against their forced marriage). In one of the stories I read she had eloped, and her father and brother had contacted her after, saying that she should come and visit her family. She went back and was sadly killed. According to Wikipedia  “Over 4,000 cases were reported in Pakistan between 1998 and 2004. Of the victims, almost 2,700 were women and just over 1,300 were men”. Other causes of being killed include dressing immodestly, being a victim of rape and many others.

What I was surprised about was how many countries honour killings occur in. Aside from Pakistan, they also occur in the UK, Iran, Italy, Greece, Canada, Australia and Sweden. They also occur in many countries in Latin America, and for some reason there they are known as “acts of passion”. It was ridiculous to find out that so many countries are allowing this types of killings to occur! Why is nothing being done? Why are there not more protests, and posters, and awareness campaigns?

It should be noted that although a lot of countries are really doing nothing, certain countries (eg. in Northern Europe) are helping to provide a growing number of counselling and protection services for the women who are at risk.

This post is fairly short, but I wanted to just summarize and hear your opinions on this topic. Are honour killings a common problem in your country or country of origin? Do you hear a lot about them, and do you think the government should raise awareness? Let me know in the comments!

A hungry, tired student with a lot on her mind. Follow for posts about culture, travel, beauty and lots of rants!

Don't forget to follow if you want to keep up to date with my posts!
Follow Minty Freshie on WordPress.com